who has not already impose, the fascination this small colorful "bogus" with the magic numbers to we call money? except the printed numbers (such as20, 50, 100, 200, etc.) we are interested only still, what is all this gets when the eintauscht appeared. specifically, themonetary value geldscheines of us more important than the aesthetic. but what

happens if the value which seemed no longer by the numbers, but by the aesthetics of

images that are important tosee, is determined? ... yes, but has not each person a separate taste, then how are money in trade as wertäquivalent ? will some questions. banal words, how should i know that the beauty of the picture on the licence is sufficient to

after a sumptuous meal my pit to pay? such or similar thoughts like a perhaps move when one with rainerröschkes new work busy. money, in the original, which he painted were not

"encounters 99" under this title will be held on week of 17 -- 18 september 1999 on the kunsthof in wagenhofen an event with exhibition and workshops . surrounded by musical performances and culinary have offered visitors the opportunity to art, architecture and staff . the bringing different disciplines the tradition with the innovation, the event to something special. they forum will be for people who are meet and exchange of traditional and innovative, be it at build or in the leadership of business and employees and of course about art and money.

in addition to the new work rainer röschke of the other in a near future the virtual gallery bank neuburg also be found on the internet , can workshops of the architect albert ringelstetter on build modern and s and kommunikations trainers gerhard stiglmair on mitarbeiterorientierte visited. much space of course, also for discussions and exchanges

remain. open between 13.00 -- 21.00 clock on 17 and 18 sept. for children will bearranged and the probably is not physical too short. the kunsthof is located at the neuburg road to

augsburg shortly after the receipt of wagenhofen on the right side (signs note).

where is wagenhofen? the small town is one of rock n pipes also a small village, near neuburg on the danube the environment is inconspicuous, most residents are catholic, choose csu and the voluntary fire brigade is an important factor of community life. and there's rainer röschke. gartenzwerge point the way to his kunsthof. the figurines nice, well-held ornament citizens of many small gardens. are obviously not natural. you get a cool cigar or a flower in the mouth clamped. they give a foretaste of the kunsthof. the former farm seems like a villa kunterbunt for adults. the visitor looks puzzled and whether the plethora of "eyes fodder." inside and outer area and hang pictures, objects, sculptures and installations, playful and seemingly randomly distributed, grouped again and again. behind the seemingly indiscriminate arrangement is, however, a sophisticated choreography. the overall effect: harmonious, but never boring. every work of art stands for itself, but gained the overall context of a special importance. this work philosophy has rainer röschke the concept additionismus. even a superficial look at the kunsthof testifies to the enormous hard work of the artist. a mad, his art lives and loves, with remarkable virtuosity all the materials and techniques. the hand tools to received the austrian steyr born and grew up in neuburg röschke in munich. at the academy of fine arts, he first studied painting, sculpture later. soon first exhibitions in munich's haus der kunst, a series of presentations, mostly in southern germany, joined in: 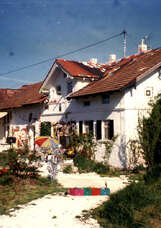 his portraits of children and the life style of the "early years" show as well as the collages his great graphic and picturesque. hardly a genre of visual art, with whom he would not focus. the women's fabulous pictures of melancholy beauty, wooden figures appearing archaic or filigree bronze sculptures can hardly a viewer indifferent. again and again smoke in the images röschke the typical characters: moons, crosses, male. bulky pictures, the holy mountain motifs or kitischige show, with neon colors and alienated röschke-speed stick figure on the disrespectful canvas. the child jesus on the arm of the mother of god gets a penis colour, which betulichen a completely new image importance. röschke deals with taboos apart, provokes, puzzled, disturbed, amused - but never charged with the index finger of the upper teacher, the viewer always room for one's own imagination einräumend. the materials with which rainer röschke beyond the traditional rail works could not be more different: flea market finds, barbie dolls, old toys, jam jars, saw blades, tiles, branches of bog oak, metal and 'and. thus, the head of a broken saints figure on an iron sculpture assembled and ready is an object that its bizarre beauty puzzled. true to the röschkeschen philosophy, the boundaries between art, design and architecture meaningless. what remains, says neuburger, is a total work of art. in this sense, he "art construction. this includes commissioned works, such as the fountain mitkinderfiguren, which he designed for a clinic. even more" steam "he can in the design of private homes. etlichen buildings, he has a very unique character. tile patterns in specific art style baths lift far beyond the status einernasszelle up, funny fireplaces, nested books bookcase, sockets and colorful carpets, to snuggle up the walls turn into the living room experience. even the boiler room is a colorful design - where the artist's words, finally, the heart of a house. the wagenhofener kunsthof, long time the location of röschkes is an association founded in 2002 over the kunsthofverein wagenhofen. the association is concerned, especially young people to art overall, to organize exhibitions and needy artists. a kids' flea market and seminars in the field of youth work are also adopted. rainer röschke, now in the neighborhood of "villa cottage 'lives, says. a total work of art in the province - no contradiction.